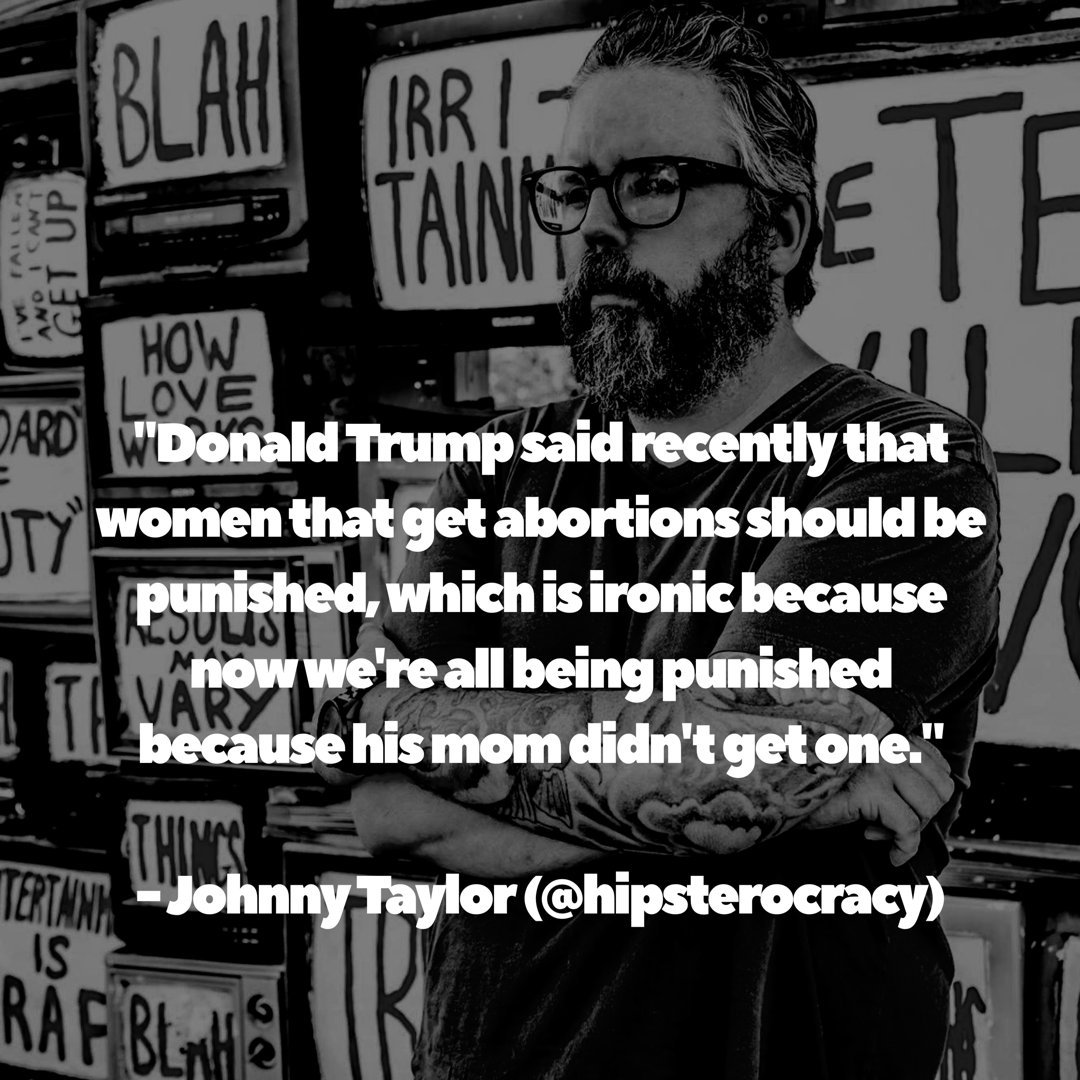 ‘Donald Trump sad recently that women that get abortions should be punished, which is ironic because we’re all being punished use his mom didn’t get one.” Johnny Taylor @hipsterocracy 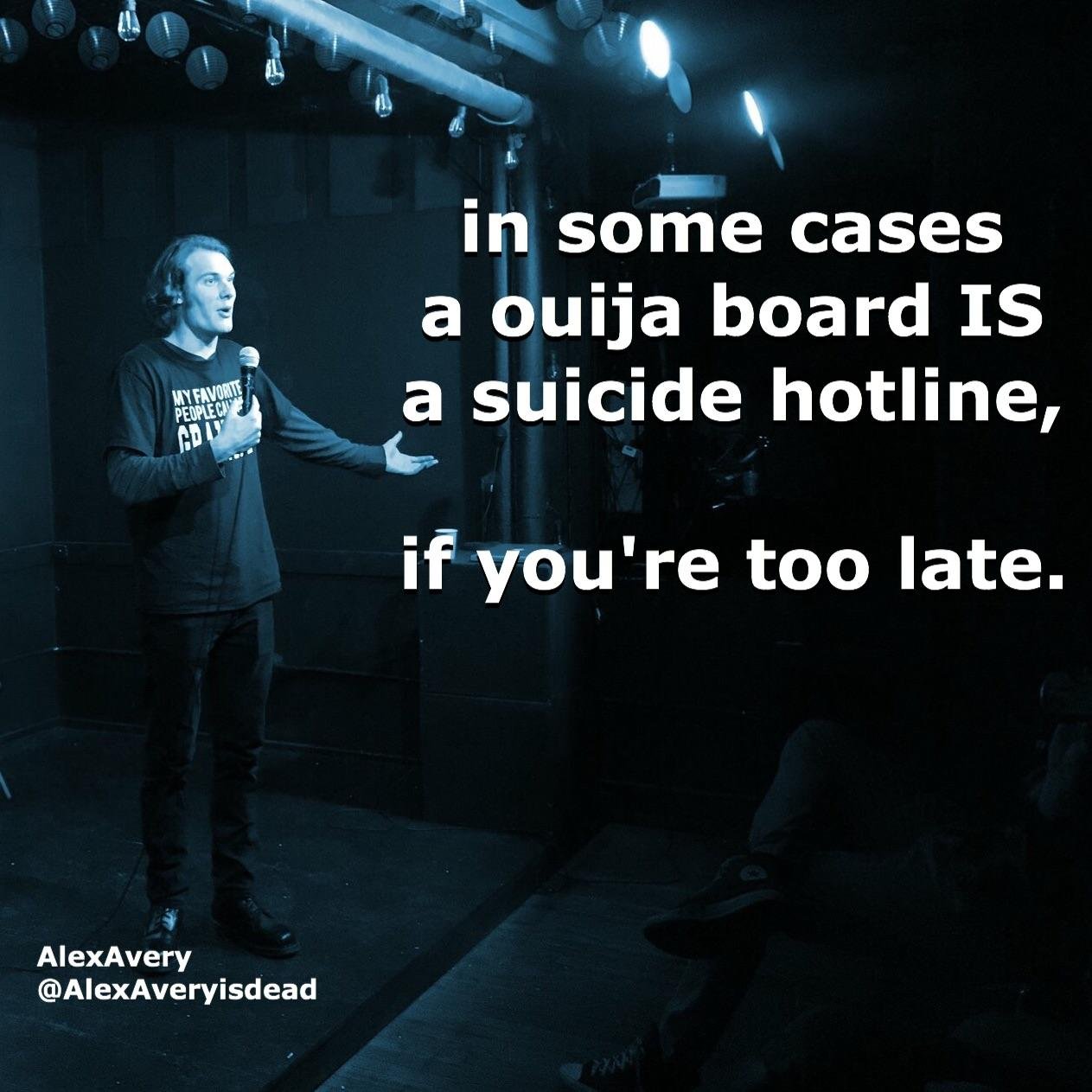 in some cases a Ouija board IS a suicide hotline, if you’re too late. AlexAvery @AlexAveryisdead 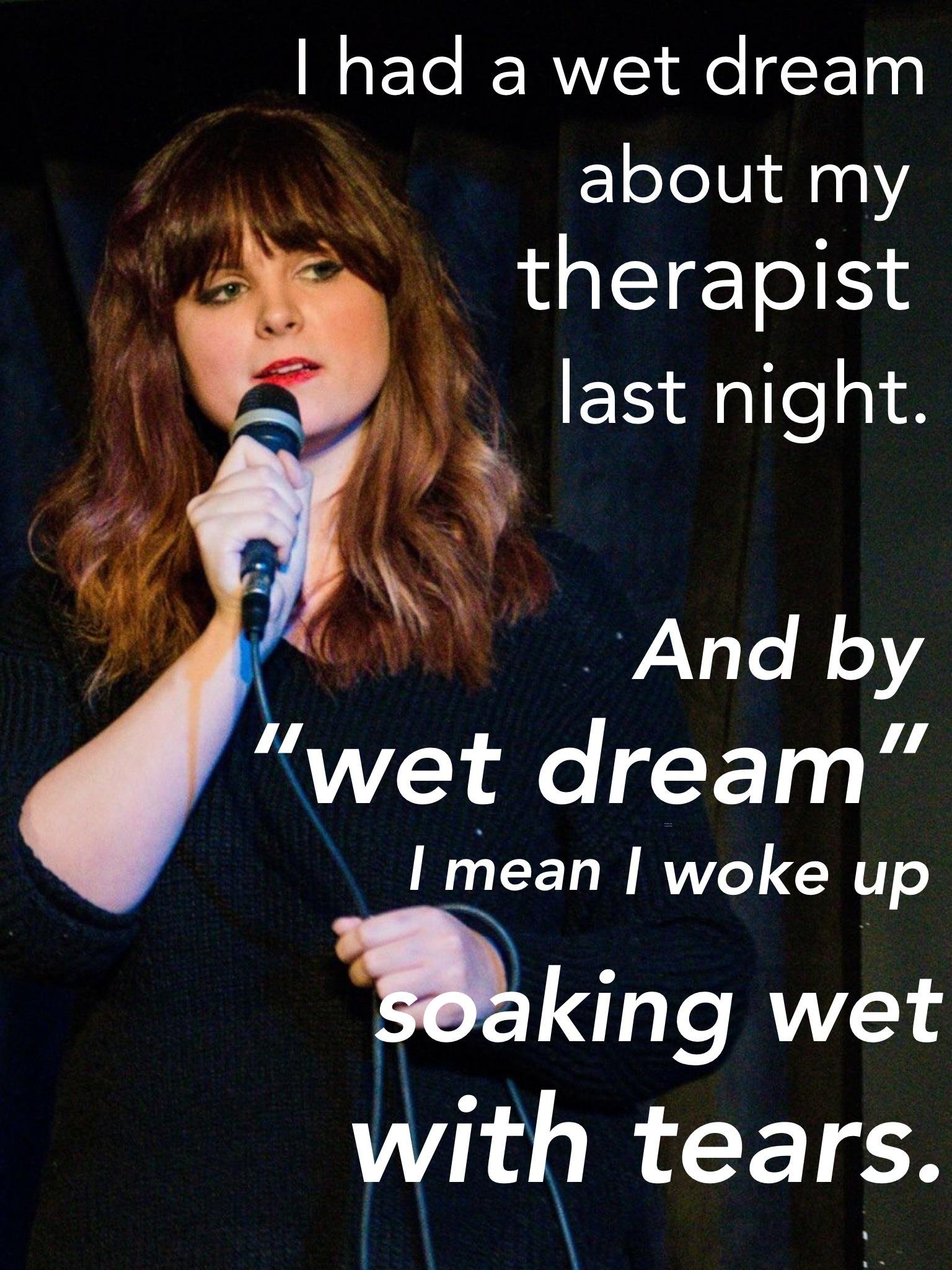 I had a wet dream about my therapist last night. And by ‘wet dream” I mean I woke up ‘Soaking wet with tears. 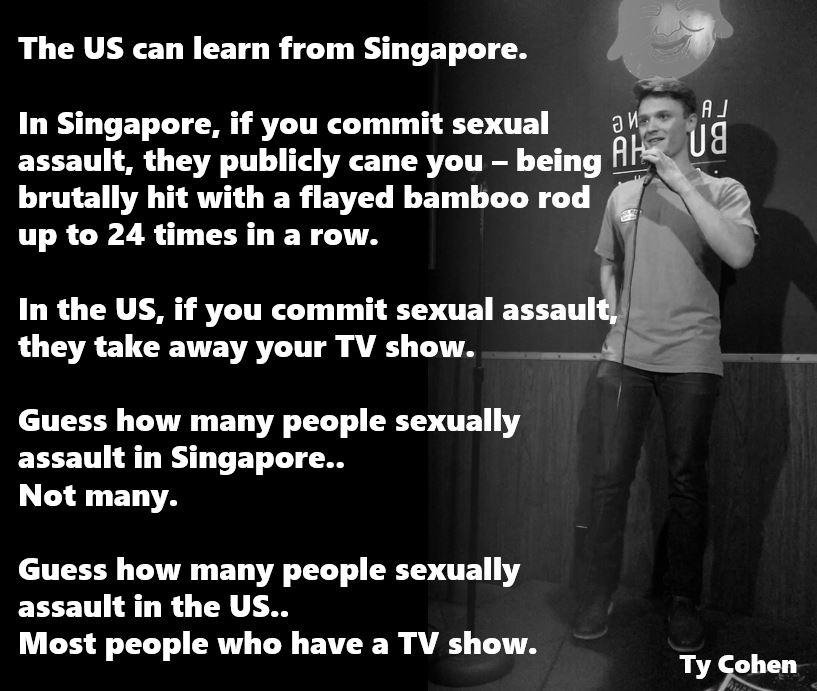 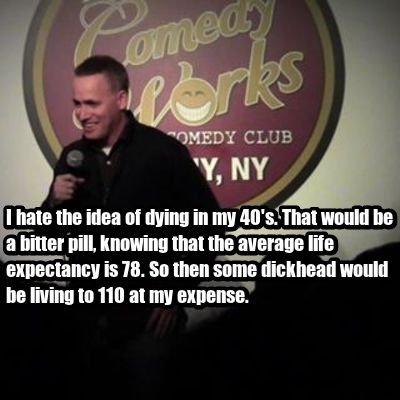 I hate the idea of dying in my 40’s. That would be a bitter pill knowing that the average life expectancy is 78. So then some dickhead would be living to 110 at my expense. 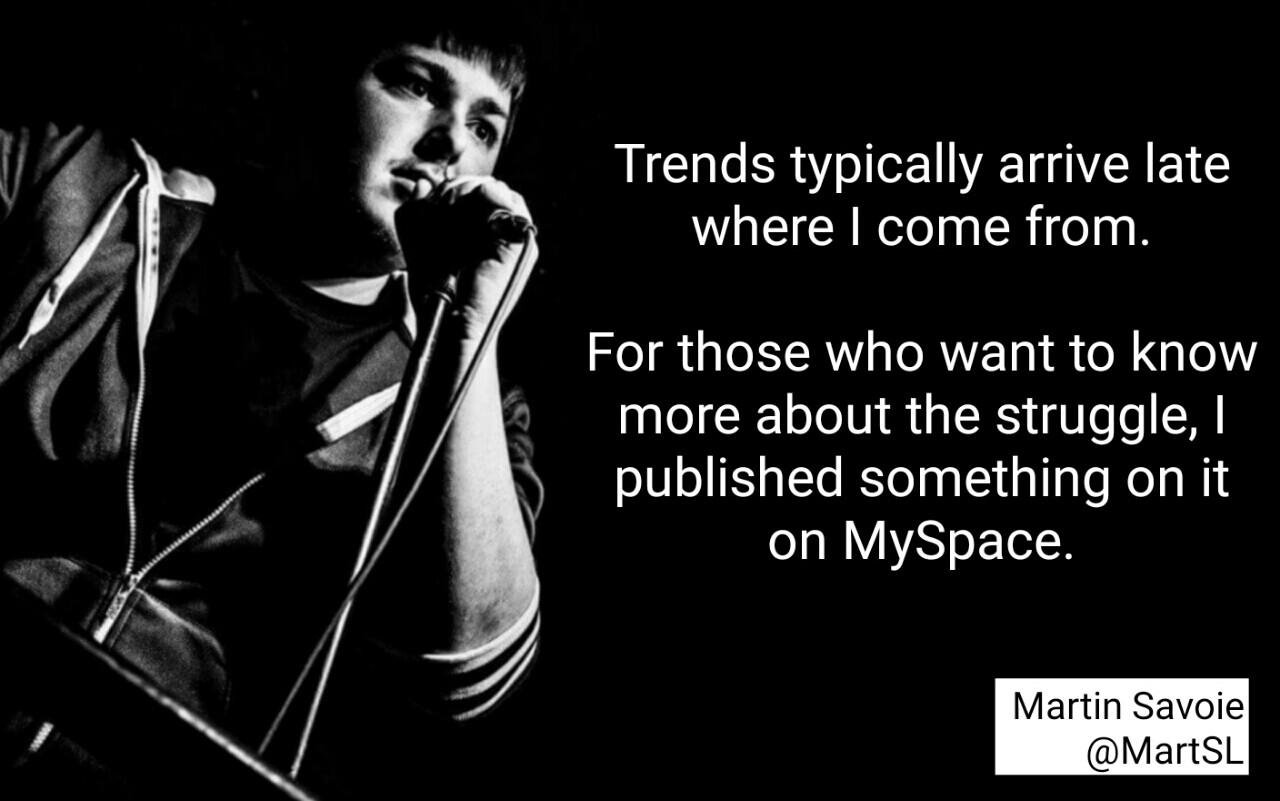 Trends typically arrive late where I come from. For those who want to know more about the struggle, I published something on it on MySpace. Martin Savoie @MartSL

I dreamt last night that I was bitten on the hand by a snake, and I had to keep sucking the poison and spitting it out. Clearly, it worked, because I woke up, and my pillow was SOAKED with venom. Brandon James @ijamescomedy 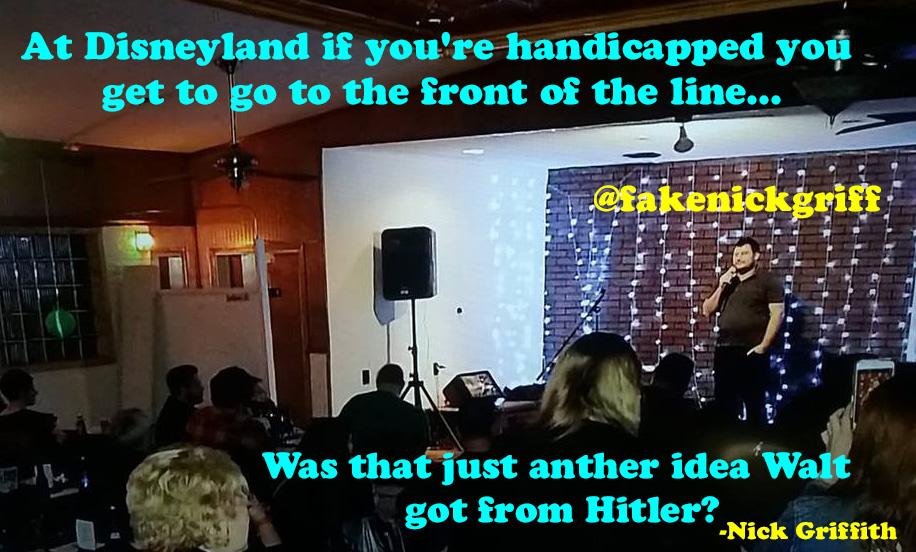 At Disneyland if you’re-handicapped get to go to the front of the line… Was that just anther idea Walt got from Hitler? -Nick Griffith 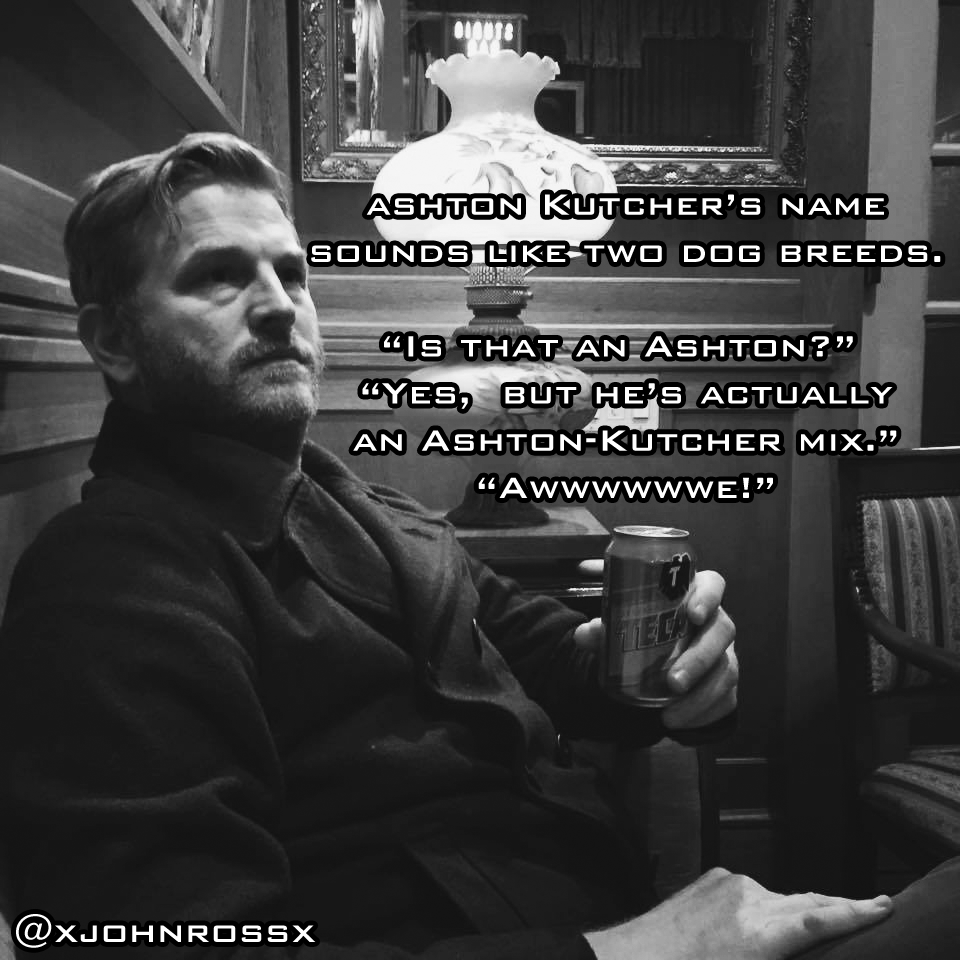 ASHTON KUTCHER’S NAME SOUNDS LIKE DOG BREEDS. “IS THAT AN ASHTON?’ “YES, BUT HE’S ACTUALLY AN ASHTON-KUTCHER MIX.” “AWWWWWWE!” @XJOHNROSSX 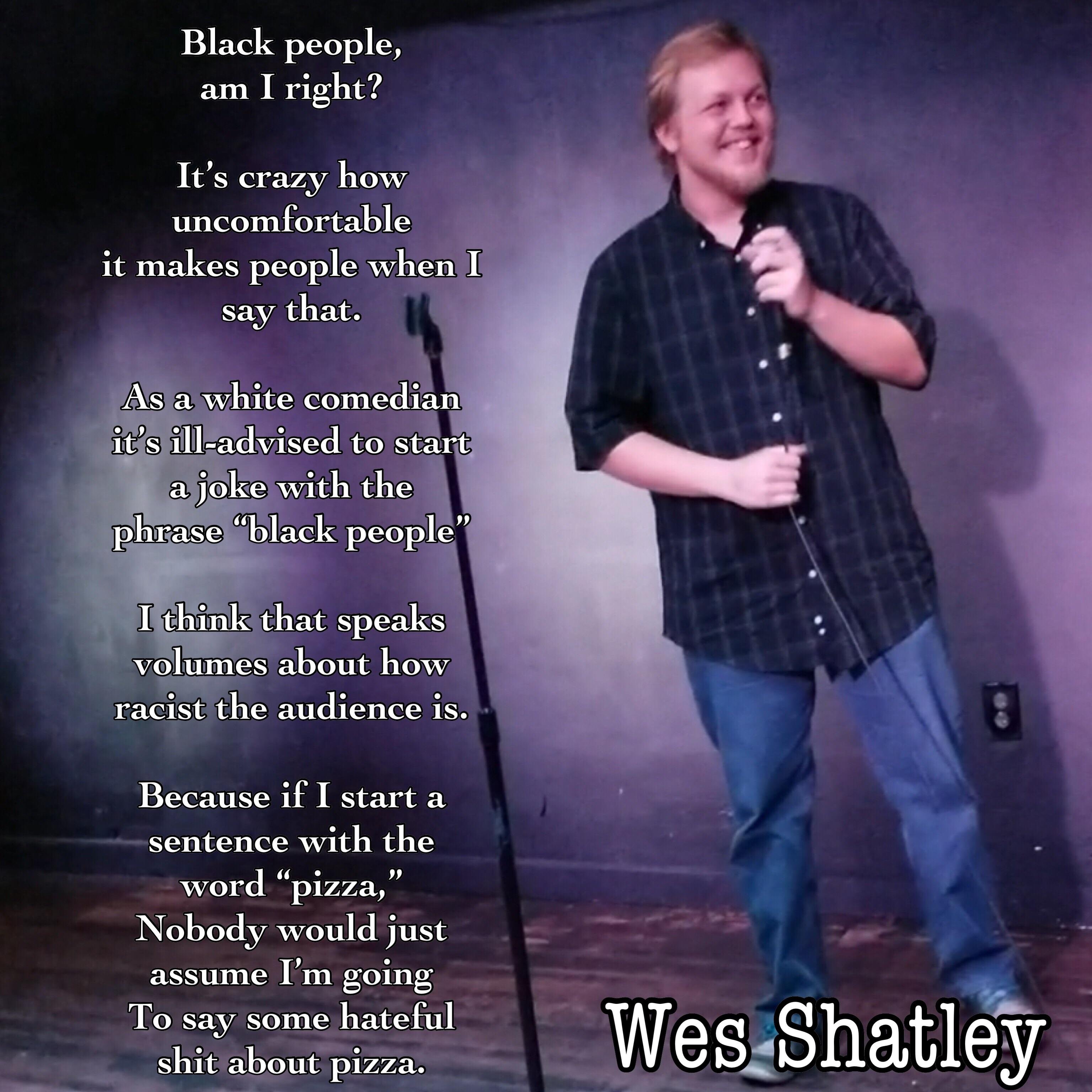 Black people, am I right? It’s crazy how uncomfortable it makes people when I say that. As a white comedian it’s ill advised to start a joke with the phrase ‘black people’ I think that speaks volumes about how racist the audience is. Because if I start a sentence with the word “pizza, Nobody would […] 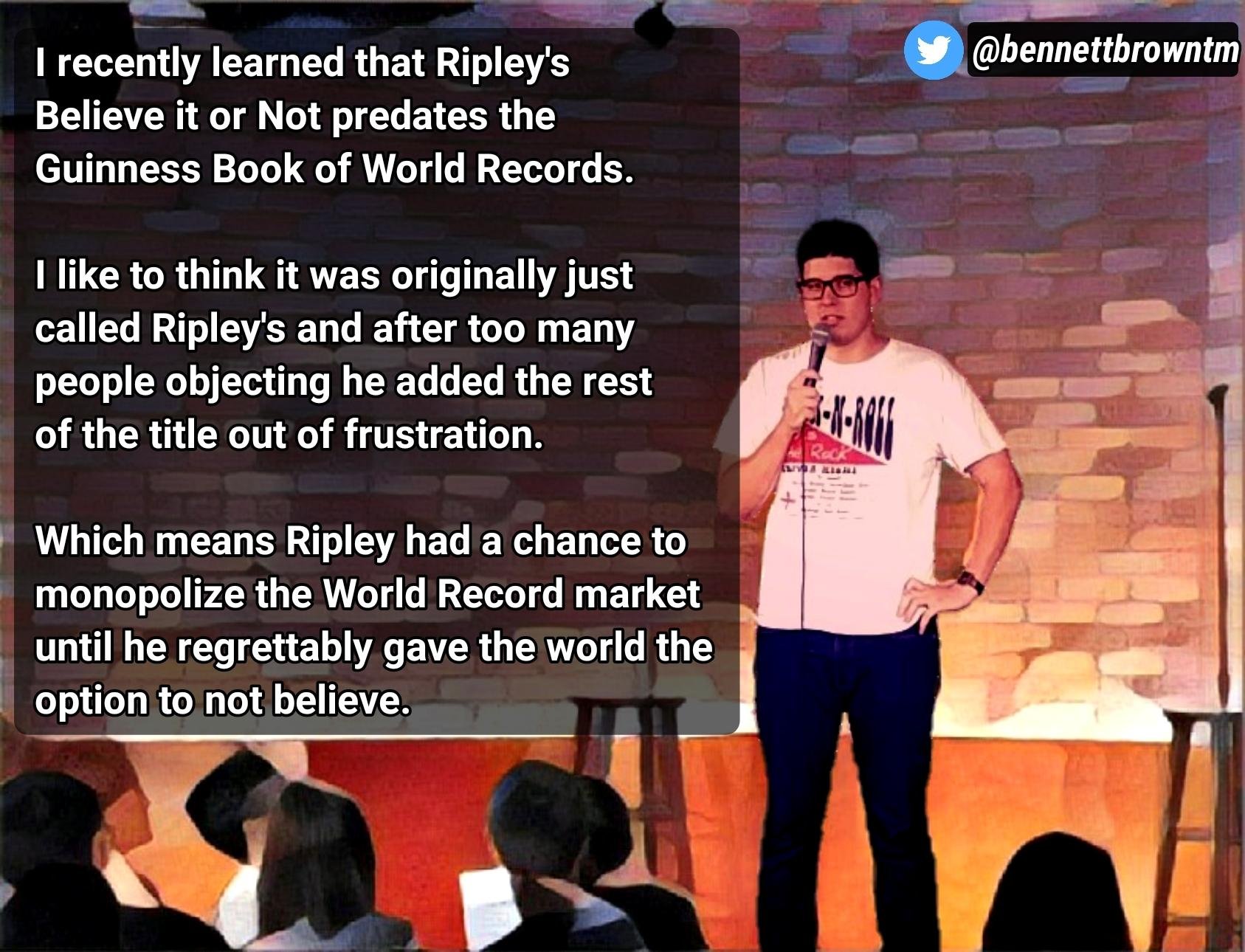 I recently learned that Ripley’s Believe it or Not predates the Guinness Book of World Records. I like to think it was originally just called Ripley’s and after too many people objecting he added the rest of the title out of frustration. Which means Ripley had a chance to monopolize the World Record market until […] 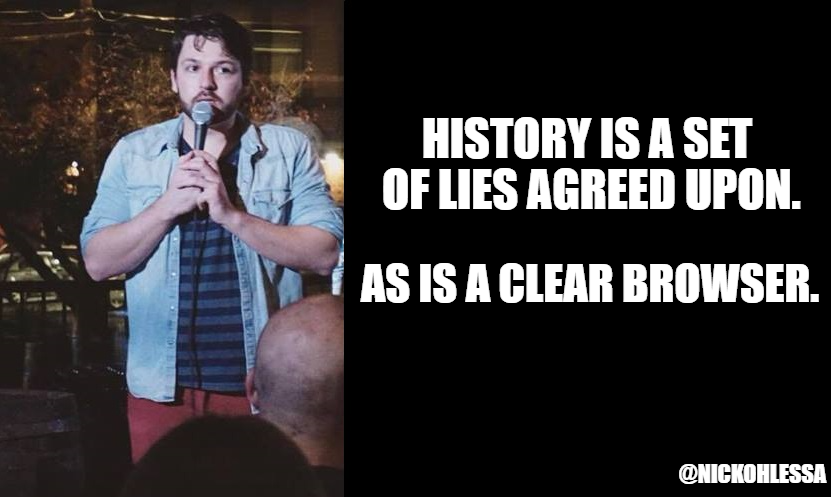 HISTORY IS A SET OF LIES AGREED UPON. AS IS A CLEAR BROWSER. @NICKOHLESSA 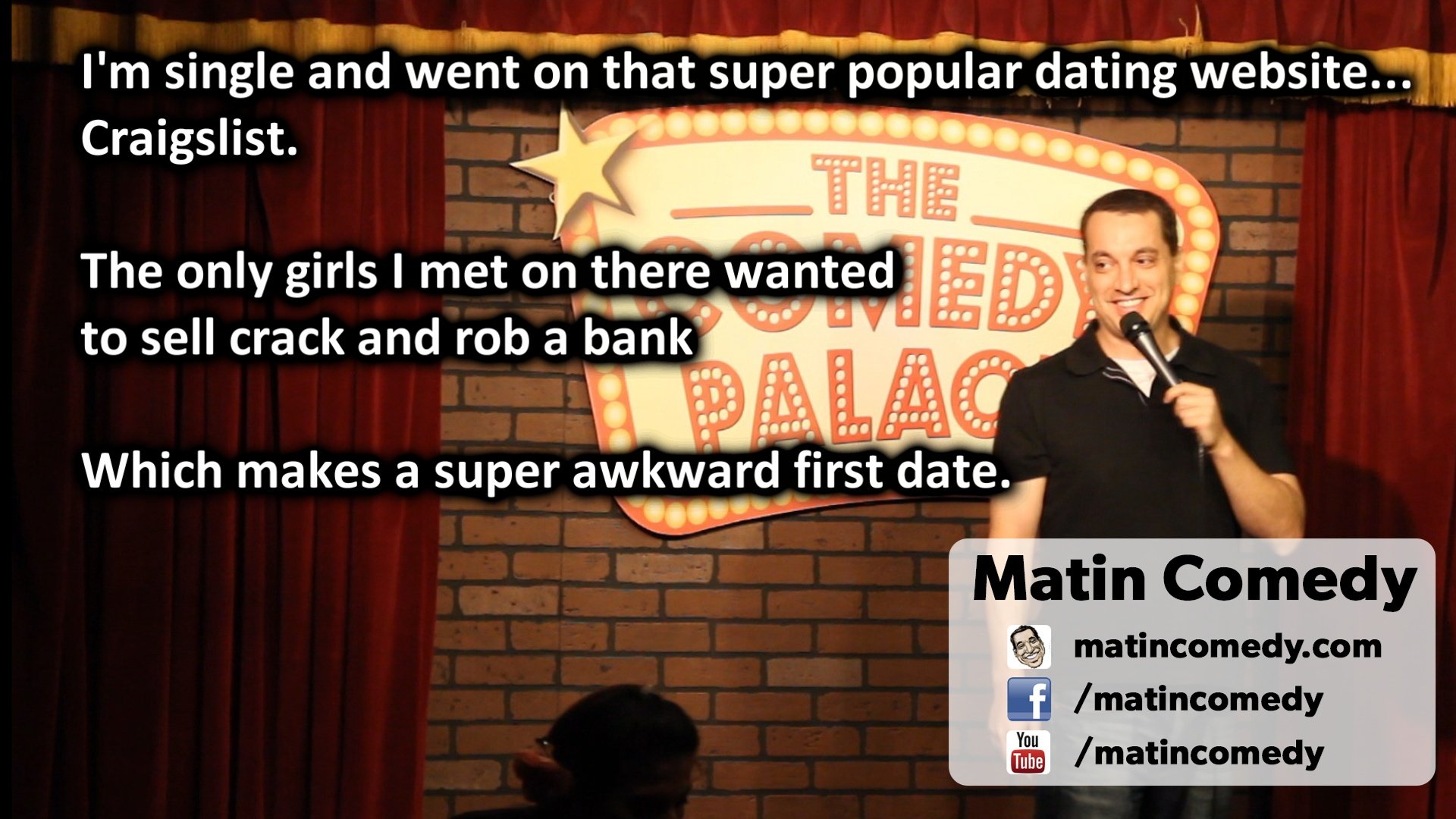 I’m single and went on that super popular dating website… Craigslist The only girls I met on there wanted to sell crack and rob a bank. Which makes a super awkward first date. 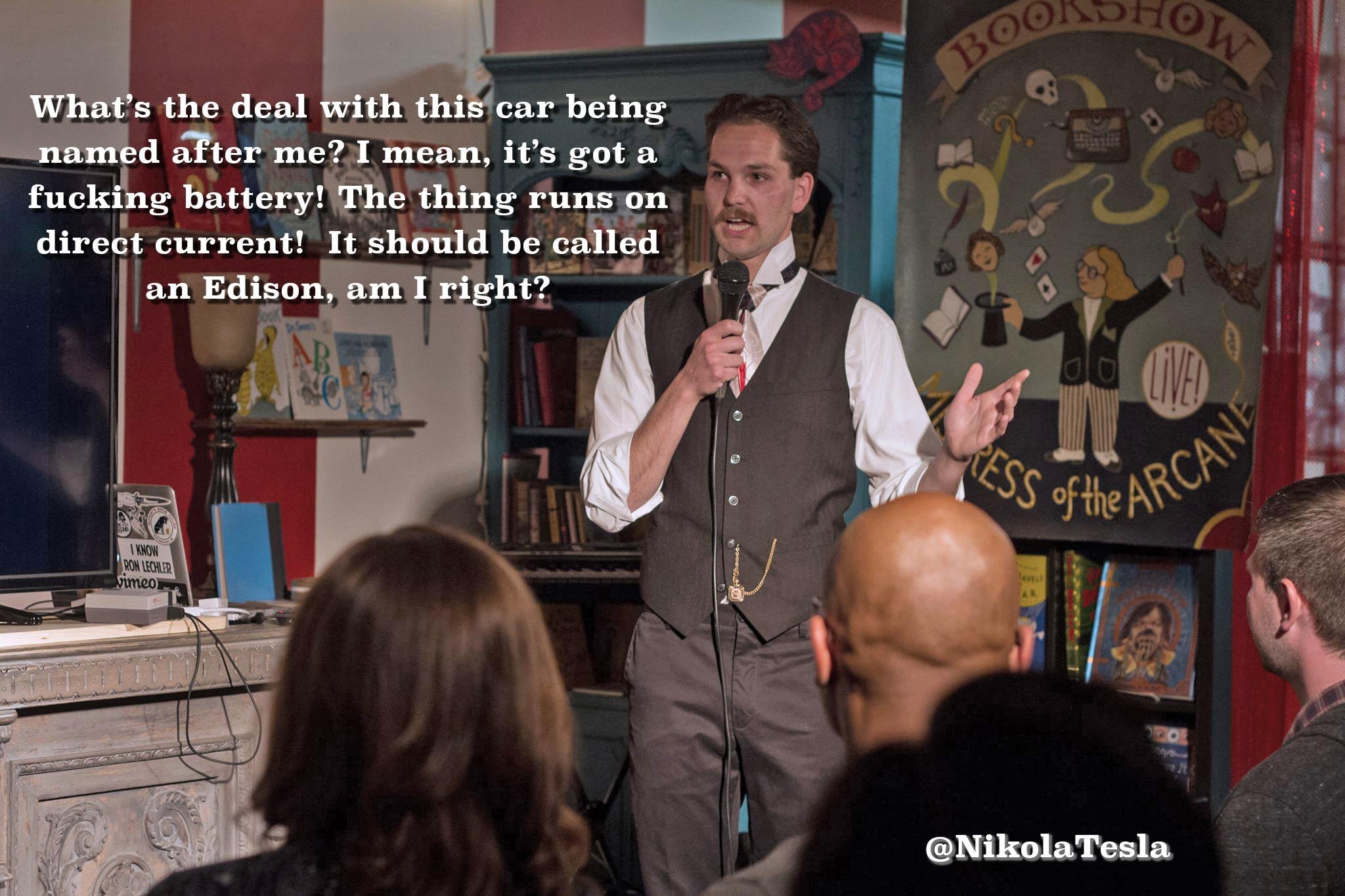 What’s the deal with this car being named after me? I mean, it’s got a fucking battery! The thing runs-on direct current! It should be called an Edison, am I right? @NikolaTesla 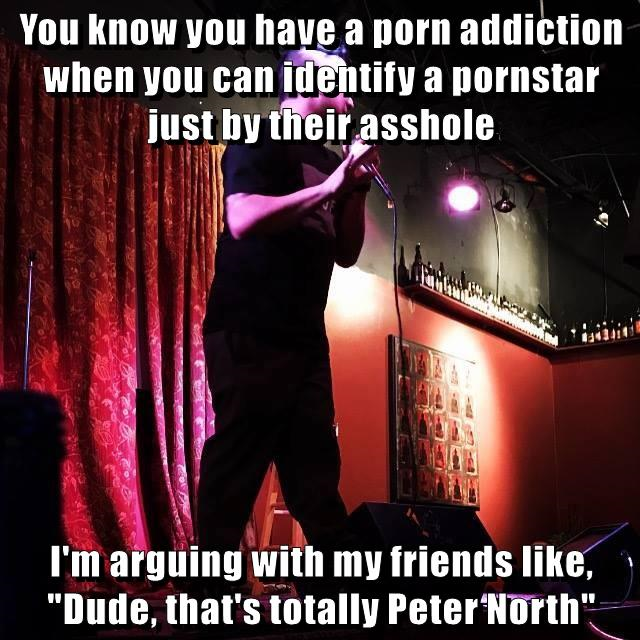 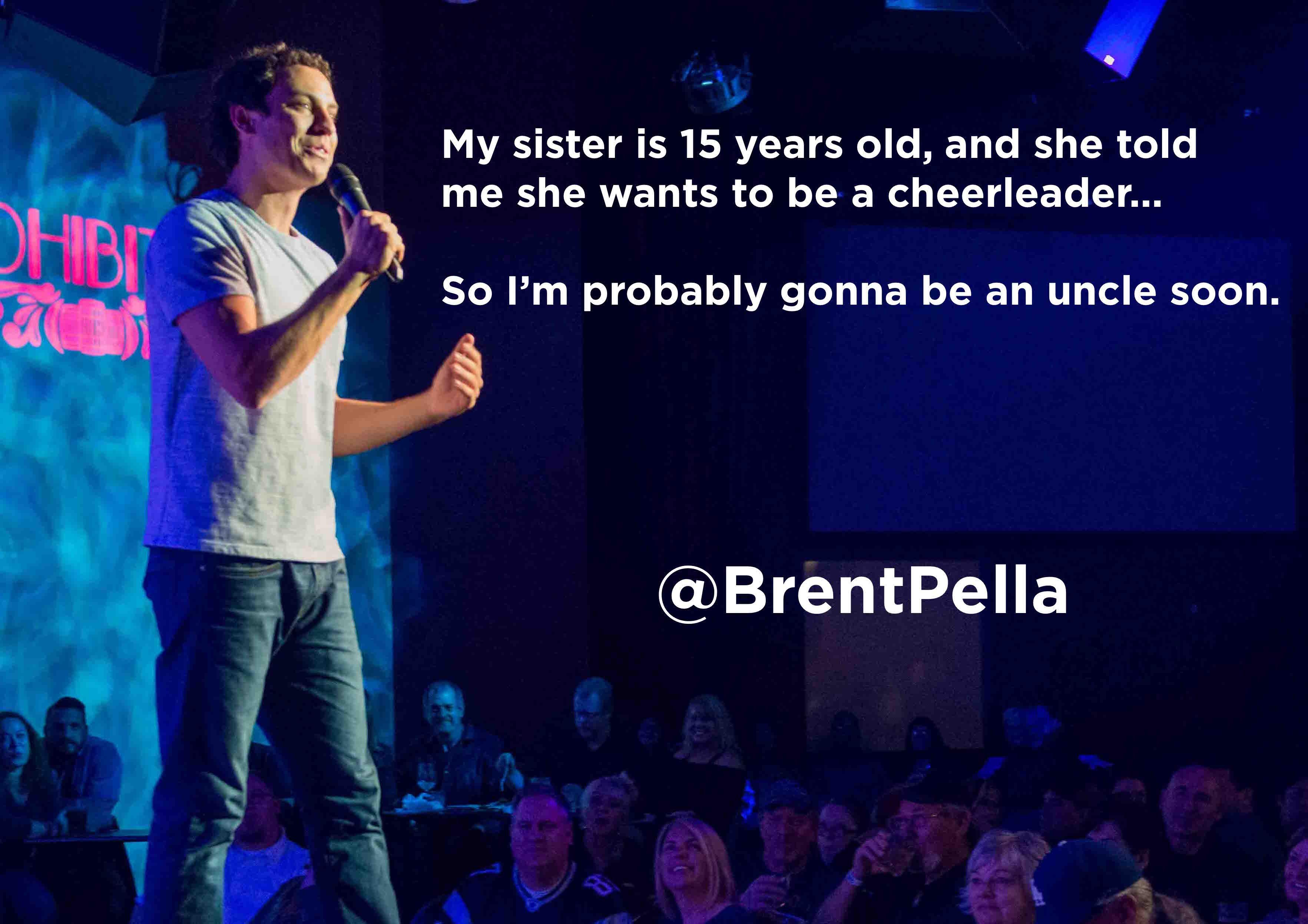 My sister is 15 years old, and she told me she wants to be a cheerleader… So I’m probably gonna be an uncle soon. @BrentPella